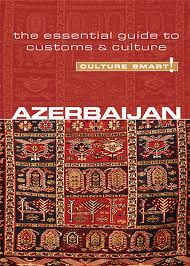 I never wanted to get into the culture/tour guide book, but I boldly went into that territory when I chose a book about Azerbaijan. There were a couple of considerations which led me to this decision: 1.) I had never before heard of Azerbaijan and didn’t have any particular attachment to this country; and 2.) there were a limited number of affordable books which focused solely on this country. When I started this challenge, I also purchased the books I read. As time went on, I realized that if I continued this trend, I would eventually be the owner of a pretty epic library.

(As a lover of classical music, I must digress into an incredibly interesting aspect of Azerbaijan. Azerbaijan was the home to the first opera house in the Islamic world. While doing some digging on the internet, I discovered that there is apparently an interesting history to this opera house. According to some rumors, it was built by a rich oil businessman after falling for an Italian opera diva. Nonetheless, it has become one of my new goals to see an operatic production in the Akhundov Azerbaijan State Academic Opera and Ballet Theater in the country’s capital of Baku.)

Culture Smart! Azerbaijan by Nikki Kazimova has developed in me an appreciation for this country. Some interesting facts of this country include: 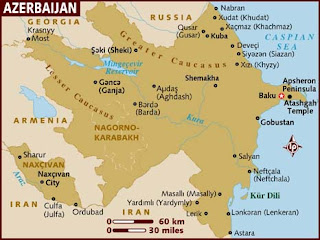 To be honest, this book left me with more questions than answers. It gave me just enough information about Azerbaijan that I began to develop questions. For example, I have a desire to learn more about the genocide conducted by the Armenians and its importance to Azerbaijan. I would also like to know more about the Azerbaijan oil-based economy, how this has affected its relationships with the outside world (including the West), and the efforts to diversify it.

Please feel free to comment on the topics or note something interesting from the book. I look forward to hearing your opinions!
Posted by Unknown at 9:59 PM