In the Lion’s Den: An Eyewitness Account of Washington’s Battle with Syria 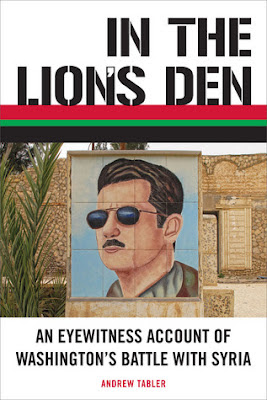 While browsing the web in May (my ultimate procrastination when studying for exams), I came across an article regarding Asma al-Assad, the first lady of Syria. The article delved into her very European upbringing – born in the United Kingdom to Syrian parents, obtaining a degree in computer science, and working for Deutsche Bank – and the hopes of Syrians of what her presence might mean to the country and its development. It then contrasted her modern image with the present-day situation in Syria: discontentment in the country following the emboldening Arab Spring, overall chaos, and young people being killed by government forces.

When searching for a book regarding Syria, I found myself faced with two choices: a cultural book describing the archaeology, history, and the customs of the Syrian people, or a political book that documented the al-Assad regime. Despite my worries of reading solely opinions, I opted for the latter choosing Andrew Tabler’s “In the Lion’s Den: An Eyewitness Account of Washington’s Battle with Syria.” In short, I did not want to read that “all is well and good in Syria” in books written during the optimistic wave of the early 2000s with the rise of Bashar al-Assad to power. I felt that based on the recent developments, it was important to gain an understanding of this government, its structure, and the international community’s stance. Moreover, this book was published in 2011, thus containing more recent information.

Based on the title of the book, I was expecting a good deal of the book to be about the United States. Fortunately, the book did not focus on the United States as much as I first assumed.  Andrew Tabler (whose blog contains a lot of interesting information regarding the recent developments in Syria) lived and worked in Syria with relative freedom from 2001-2008, despite the fact that he was a United States journalist. Fluent in Arabic, he became disenchanted with Egypt following the general population’s anti-American sentiments following the attacks on 9/11. He basked in the relatively liberal atmosphere of Syria, where women wore westernized clothes and people expressed their concern, asking if the author had any relatives or friends affected by the attacks in New York. Having met directly with first lady Asma al-Assad, he garnered her support to start the first English-language magazine, detailing Syrian affairs. Working under one of the NGOs to which she offered her patronage, he was able to witness the changes in Syria during these tumultuous years. 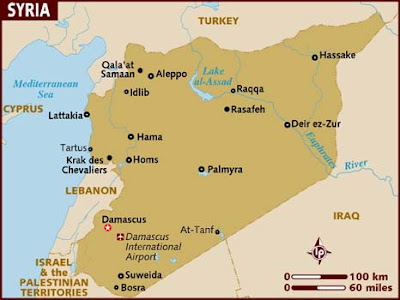 One of the main issues which the author noted was the presence of the West and the United States. The Syrian government, which prided itself on being secular, increasingly developed ties with Islamic groups, which intensified with the United States’ presence in the Middle East, most notably its presence in Iraq. Syria began to forge ties with Iran, whose government type is an Islamic Republic. Islamic rhetoric was also increasingly evident in the government. Bashar al-Assad stated in a speech, “We must be steadfast in facing this foreign attack… This region has two options: chaos or resistance. In the end, we are going to win, one way or another, even if it lasts a long time. Syria is protected by God.” (page 118.) Tensions intensified when a group of Syrians demonstrated and set fire to Danish, Swedish, and Chilean embassies, following the presence of a cartoon of the prophet Muhammad in a Danish newspaper. (The author stated that in a country as strict as Syria, these actions would have to be tolerated by the Syrian government.)

Although this book delved into several topics, including those of international relations and economic forces, what I found most interesting was the topic of reform. When Bashar al-Assad became president, there was a feeling of optimism, as they believed his rule would allow more liberty than that of his father, Hafez al-Assad. This optimism continued as the Syrian people expected reforms to the Baath Party. However, the reforms that were implemented were not near enough to satisfy the Syrian population. The Epilogue states the power of the Arab Spring on page 233, and how it has affected the population. No one is above the government crackdown, including children. I feel as if there is a great lesson to be learned from the al-Assad regime in Syria, and the importance of implementing reforms. Only time will tell what will occur in Syria, but one thing I know: I now feel knowledgeable enough to look forward to these new developments.

Please feel free to comment on these topics or note something interesting from the book. I look forward to hearing your opinions!
Posted by Unknown at 10:00 AM