Unknown Sands: Journeys around the World’s Most Isolated Country 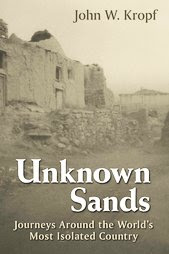 When people question the relevancy or the accessibility of classical music, they just show their ignorance (at least, this is my opinion, as a classical musician.) Classical music is deeply embedded in our culture – especially in our entertainment media. Have you heard of Hans Zimmer, Jerry Goldsmith, Dario Marianelli, or James Horner? If you answered “no,” I would suggest that you Google their names. My guess is that you probably have heard – and been inspired by – their music.

Some worry that classical music will be overtaken by other industries – film, television, etc. I am not among them, as I am incredibly excited about the newest developments emanating from the classical music world. Karl Jenkins is a perfect example of someone who effortlessly transitions between commercialism and art. Perhaps most famously known for his Palladio, which was famously used in De Beers diamond television commercials, his Adiemus is truly a masterpiece on both an artistic and intellectual level. Combining musical influences across the world, Jenkins utilizes the voice as an instrument, as there are no lyrics. The absence of lyrics also allows the music to be equally enjoyed by all, despite differences in languages or cultural practices. Christopher Tin is another composer who is changing the classical music world. Well-known as a composer for the music of video games, he won two Grammy awards in 2011 for his Calling All Dawns.

The Silk Road Project is another exciting movement, led by famed cellist Yo-Yo Ma (for those of you in the younger generation, he was one of the performers at Barack Obama’s 2008 inauguration.)  The purpose of this project is to promote cross-cultural understanding by connecting musical traditions. Similar to the way that the Silk Road sparked innovation and ultimately brought the world together in new ways, this organization seeks to spark innovation in classical music and bring together all the world’s musicians.

The Silk Road is an ever-present aspect in John W. Kropf’s “Unknown Sands: Journeys around the World’s Most Isolated Country.” In referring to the world’s most isolated country, the author is referring to Turkmenistan. Turkmenistan, which is located in the heart of Central Asia, borders on Iran, Afghanistan, Uzbekistan, and the Caspian Sea. A country with one of the largest natural gas reserves in the world and bordering a US war zone, Turkmenistan has only recently emerged as a topic of importance in the West.  However, Turkmenistan is not known as an exemplary country in the region, but rather as “the most Soviet authoritarian of the former Soviet Republics. The Economist magazine had even dubbed it the worst place to live because of its repressive economic and civil liberties” ( page 59.)

Nonetheless, the area of Turkmenistan was of strategic historical importance, as it was located on the Silk Road. From the stomping ground of Alexander the Great and Ghengis Khan to a pawn of the “Great Game” of power politics between Russia and Great Britain during the early 19th century, Turkmenistan and its history is deeply interconnected with the history of the Western World. 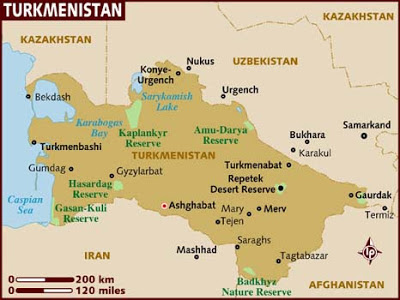 The author, John W. Kropf, moved to Turkmenistan in the late 1990s, after his wife had been assigned to the United States Embassy in the country’s capital of Ashgabat. He eventually began to work as the Country Director for the U.S. Agency for International Development (USAID.)  They both left the country soon after 9/11 and before the War on Terror in Afghanistan began in earnest.

The political life in Turkmenistan since its independence in 1991 has been dominated by two larger-than-life leaders. This book, as it was published in 2006, focuses on the first political leader, Saparamurt Niyazov, before his sudden death later that year. (The political life is now dominated by Gurbanguly Berdimuhamedow, who was re-elected as President this past year with over 95% of the vote.) Following independence from Soviet rule, Niyazov reverted to a Stalinist way of ruling and established a cult of personality. The author mentions this while describing his first time venturing into the capital city: “There were so many portraits that they looked out at each other from every direction, every angle… The full-length, super-sized, gold statues of him often included a cape. One estimate put the number of Niyazov statues throughout the country in the thousands” (page 25.)

Another interesting aspect which the author mentioned was the development of a Turkmen national identity. The topic of national identity is of particular interest and importance, considering the fact that Turkmenistan was dominated by the Soviet Union in recent history. One of the first actions of Niyazov to create this identity was to purge any and all elements of Russian culture from Turkmenistan. The ethnic Russian minority has experienced prejudice in recent years and many have chosen to immigrate to Russia. The President had also decreed that all official business was to be conducted in the Turkmen language, rather than in the Russian language. Many officials and government workers suddenly found themselves jobless, because the Soviet education system had left them without an educated knowledge of their mother tongue. Niyazov then proceeded to create a new national identity, based on what he claimed to be traditional Turkmen values. As the author worked in both the rural and urban areas, he noted that there is a huge discrepancy between the traditional Turkmen in the rural areas and the government-fabricated traditionalism in the cities. “While he [Niyazov] portrayed himself as the leader of all Turkmen and exploited traditions in his attempt to build a national identity, it was obvious to those outside of the capital who practice these traditions that this was not consistent with his own culture” (page 90.)