The History of Venezuela 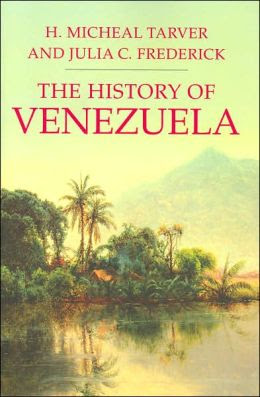 Published by textbook company Palgrave Macmillan, I did not expect for The History of Venezuela by H. Micheal Tarver and Julia C. Frederick to be a particularly exciting or interesting read. I was correct in this assumption – the book presents a brief historical outline of Venezuela in a dry manner that is filled with facts. However, I chose to read this book first in order to build a foundation on which I could build as I read books that dealt with particular events that occurred later in history. Instead of offering a summary, I will share my developing ideas after having connected some of the information presented in this book.

Venezuela is a divided land – evident in its politics, its history, and its hierarchy based on race.  The book notes that “since the breakup of Gran Colombia in 1830, Venezuela has been a republic governed by 27 different constitutions and 42 different heads of state” (page 61.) Since its independence, Venezuela experienced a civil war, which having lasted for 12 years (from 1858 to 1870), had grave effects on the country.  Estimates show that between 8 and 11 percent of the country’s population died – most not though direct conflict, but rather through mass migrations for safety, which led to perfect environments for disease to thrive. Venezuela has also had a large number of dictators and dictator-like figures, whose regimes are marked by the loss of individual rights and often for government corruption, notably: Antonio Guzmán Blanco (1870-1888), Juan Vicente Gómez (1908-1935), Marcos Pérez Jiménez (1952-1958) and Hugo Chávez (1999-2013.)

Historically, it is important to note that Venezuela was not a unified land or culture. “There was after all, no political unity in Venezuela upon the Spaniards’ arrival” (page 74.) Unlike the Aztec civilization in Central America and the Inca civilization in South America, the land which now encompasses Venezuela was home to many different cultural and linguistic groups. In fact, the book notes that “As of April 2005, Venezuela is home to 28 ethnic indigenous groups, speaking 37 languages” (page 25.)

Finally, another striking division in Venezuela is built upon race. Although remnants of the Spanish colonial system, racial divisions persist and must remain an integral part of the discourse when discussing the current issues facing the country today. Venezuela not only has a large population of indigenous Americans, but also a large population of African descent, as well. “The sixteenth century saw the introduction of African slaves… the majority of this slave work force was used on plantations for crop cultivation and processing, further fueling economic prosperity… The ownership of slave servants became a symbol of great prestige in colonial society” (page 43.) This led to a great deal of racial mixing and the creation of a social hierarchy based on skin color. While in the colonial era, the power was held by the white Spanish immigrants or their descendants, today a similar hierarchy persists.

One question that kept jumping into my mind while reading this book: With such divisions, how does Venezuela go about creating a shared national identity? With my limited knowledge, this is what I believe that Hugo Chávez  tried to do and what helped him gain the presidency in 1999. Becoming a popular figure in the early 1990s after a failed military coup, Hugo Chávez took advantage of the atmosphere of political disenchantment which was spreading throughout the country, in spite of the population’s divisions. While he had no control over the external environment, once gaining power, he built a national movement and superimposed it on the Venezuelan population in order to create a national identity. This movement is called the Bolivarian Revolution. Named after the so-called father of Venezuela, the revolutionary Simon Bolívar, this movement was an attempt to unify the populace around the principles of populism. In fact, after gaining the presidency in 1999, Hugo Chávez rewrote the constitution according the so-called Bolivarian principles – which also changed the official name of Venezuela to the "Bolivarian Republic of Venezuela.”

Please feel free to comment on these topics or note something interesting from the book. I look forward to hearing your opinions!
Posted by Unknown at 11:37 AM