The Silence and the Scorpion: The Coup against Chávez and the Making of Modern Venezuela 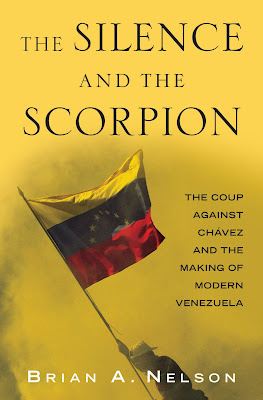 For United States Americans, Chávez and his anti-U.S. stance put Venezuela “on the map.” Following his ascendancy to the presidency in 1999, Chávez cultivated strong relationships with countries such as Cuba, Russia, and Iran. His anti-U.S. rhetoric included tirades against U.S imperialism and U.S. involvement in the inner dealings of Latin America. Needless to say, Chávez quickly became a name thrown about on United States talk show programs and Venezuela became one of the most heard-of Latin American countries in the populace’s ears.

I chose "The Silence and the Scorpion: The Coup against Chávez and the Making of Modern Venezuela" by Brian A. Nelson partly because it came with excellent recommendations, including from the The Economist magazine. However, my primary motivation for getting this book was to gain a better understanding of the political situation of Venezuela in all of it complexities. This book is divided into short vignettes – telling the stories of many of the key players in the 2002 attempted coup against Chávez, both on the government and the opposition sides. In short, this book reads like a thriller and I stayed up an entire trans-Atlantic fight to finish it.

In order to understand the importance of the 2002 coup, it is important to understand how Chávez grew in popularity so that he could gain the presidency in 1999. The political and social atmosphere of the 1990s played a huge role: “But from the early 1980s, Venezuelans watched their country – which had seemed so close to first-world prosperity – sink deeper and deeper into recession. Poverty, inflation, and unemployment skyrocketed, while per capita income plummeted. The oil bonanza [of the 1970s] had been illusory and fleeting” (page 3.) In 1992, Chávez (who was then a lieutenant colonel in the army) helped organize a military coup against the government, which ended up failing. Realizing that it would fail, Chávez jumped to national attention through a television broadcast calling for the other organizers of the coup to end their fight for the time being – implying that their fight was only just beginning. During the following years, which he spent in prison, he continued to gain popularity and won the 1998 election. One of his first actions was to rewrite the Constitution and convert Venezuela into a “Bolivarian Republic” based on more egalitarian principles.

By 2002, Chávez’s increase of power had led to massive demonstrations and calls for his resignation. The books notes that “his 80 percent approval rating had fallen to 30 percent” (page 7.) Moreover, the old elite and the workers had allied themselves together against Chávez. The book tells the story of a few days in April, in which Venezuela would experience chaos to an extreme degree- undergoing 3 presidents in 72 hours and the revocation of the ruling Constitution of 1999. The author begins this story on April 11, 2002, in which nearly one million people marched (as a part of what began as a peaceful protest) to the presidential palace in Caracas to demand Chávez’s resignation. Violence quickly erupted as hardcore Chávez supporters, organized in neighborhood Bolivarian Circles and supported by the government, took it upon themselves to defend the presidential palace against the protestors. The situation became more and more chaotic throughout the day as the police and the army were called to intervene. Moreover, the presence of snipers led to even more chaos.

Over the next few days, coalitions between the military, political, business, and labor sectors would come together and fall apart, as each individual group attempted to protect its own interests. Nonetheless, through this process, Chávez lost his power, was put under arrest, and plans were made to transport him to Cuba. (Interestingly, as the military tried to decide what to do with him, one solution was to have him tried for human rights abuse following the violence and the deaths during the protest.) As a new government was in the process of establishment, the coalitions recognized that they had different goals for the country, particularly with the revocation of the 1999 Constitution. The military restored Chávez to power on April 13th.

History is made up of the actions of a countless number of individuals acting upon their own self interest, ideals, and experiences. The author is careful to not present the 2002 coup as a concrete event in the past – with a “true” and a “false” -  but rather an important event (with serious implications for Venezuela) which we can never truly understand and are still in the process of discovering. Nonetheless, there are very clear results of this event, especially the consolidation of Chávez ’s power in Venezuela: “Chávez artfully painted himself as the victim of a right-wing conspiracy led by wealthy businessmen and fascist generals who were willing to set up a dictatorship in order to plunder Venezuela’s oil wealth” (page 268.)

Please feel free to comment on these topics or note something interesting from the book. I look forward to hearing your opinions!
Posted by Unknown at 11:45 AM