Venezuela Speaks! Voices from the Grassroots 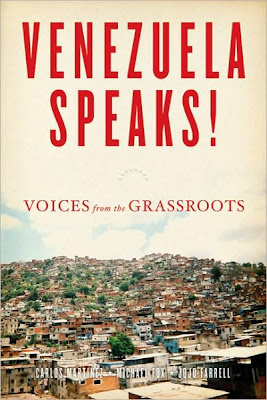 One thing that I knew for sure, when picking books about Venezuela: I needed to choose a wide assortment of books, representing a wide assortment of voices. All the Venezuelans I have met are securely in the opposition camp. When I have mentioned the name “Chávez,” I received either a slim smile and a slight shrug meaning “Let’s not talk about this right now,” or a long speech about justice and rights. I knew that if I wanted to hear/read voices in favor of Chávez and the Bolivarian Revolution, I would need to find them myself. I ended up choosing the book “Venezuela Speaks! Voices from the Grassroots,” by Carlos Martinez, Michael Fox, and Jojo Farrell, which is written in the form of short interviews by people associated with the Bolivarian Revolution.

First, what is the Bolivarian Revolution? It was termed by Hugo Chávez during his first presidential election in 1998. After taking power by majority vote in 1999, he re-wrote the Venezuelan constitution according to Bolivarian principles. It is named for the revolutionary Simon Bolívar, who fought for independence from Spain in the early 19th century and is subsequently viewed as the founding father of Venezuela, Colombia, Ecuador, Bolivia, and Peru. The book defines the Bolivarian Revolution through the following quote:

“Chávez has certainly brought the charismatic leadership necessary to unite many previously divided grassroots sectors, and he has provided a framework and name to Venezuela’s political situation, the Bolivarian Revolution. But a rigorous look at Venezuela’s political situation and the various on-the-ground experiences reveals that, to a great degree, this is a process being constructed from below” (page 1.)
The authors argue that the Bolivarian Revolution is not dependent upon Chávez , but that the rise of Chávez  to power is just a sign of a larger political movement: of the “bottom-up” political process, where the masses – who have often been voiceless and powerless in the past- take on active roles in democracy. The authors support this claim by including interviews which not only criticize the system before Chávez , but show discontentment with the Chávez government as well. The authors’ argument is especially interesting as we consider the current political atmosphere of Venezuela, which is experiencing a void without Chávez ’s presence.

To be honest, I found this book somewhat difficult to read – not because I was opposed to what was being said, but rather I felt like I was reading the same voice over and over again: This  was the situation before and these are the injustices that we faced. Now things have changed. This is what I do now in the Bolivarian Revolution. Things still are not perfect and this is what needs to change. Most of the people in the book seemed to lack original ideas: While they all had different experiences, they had all taken up the same ideas about how to advance the future – something which made the book seem less legitimate, in my view.

Granted, there were a few people who presented ideas in unusual ways. One was Marianela Tovar, a LGBT activist in Venezuela. She does not credit Hugo Chávez with explicitly helping the movement. However, she does credit him for changing the political atmosphere, so that the LGBT movement could begin organizing itself: “There was a political spark [with Chávez .] Before there was apathy and indifference toward politics; there was a very pessimistic attitude toward the future of the country…” (page 97.) She draws her own experience, noting that although she knew that she was a lesbian in the early 1990s, she saw no reason to take on a role of activism during these years.

I also found the chapter detailing the stories of Mechedniya and Wadajaniyu, two students of the Indigenous University of Venezuela, thought-provoking. At this education institution, they seek to study and validate their indigenous roots – studying the language, religious beliefs, and history of their people – noting that their “culture has been disappearing for a long time due to the arrival of Western education and the loss of [their] identity as indigenous people” (page 197.) Although the organization has received limited financial support from the government and has not even yet received recognition, the fact that it exists at all is something which they contribute to the Bolivarian Revolution: “fortified by Article 121 of the Venezuelan Constitution, which gives indigenous peoples the right to develop their own education” (page 196.)

Please feel free to comment on these topics or note something interesting from the book. I look forward to hearing your opinions!
Posted by Unknown at 11:52 AM