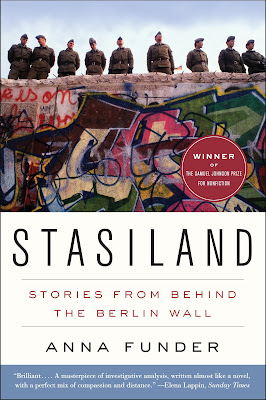 German grammar can really be a pain sometimes. I feel lucky that I had a very strict and thorough English language and literature teacher in 6th grade (shout out to Mrs. Camp!) and two years of Latin in middle school – because without these, I think I would be lost when it comes to German grammar. One example of German grammar is the many different types of articles, which one must use depending on whether the noun is masculine/feminine/neuter/plural and what function the noun takes in the sentence or phrase: nominative, accusative, dative, or genitive. I cannot tell you how many times I have copied down the included article chart (studying for tests, on test papers – lest I forget, beside my computer as I am writing essays, etc.)

It is one thing to know the grammar rules – it is another thing for them to come naturally when speaking. And in my opinion, the only way for it to come naturally, is to have thought about the rules thousands of times through examples – thinking it in your head, saying it out loud, seeing it written, writing it out yourself. A personal example of this is when I studied the movie Das Leben der Anderen in one of my German classes. The title of the movie directly translates to “The Lives of Others.” “Das Leben” means “the life” in English and is neuter and nominative. “Der Anderen” means “others” in English – but takes a possessive form because it is written in the genitive form. 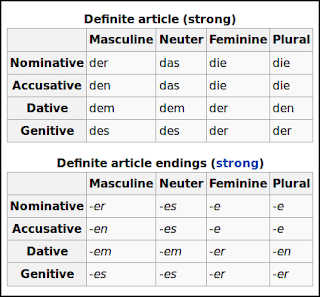 The reason I bring up Das Leben der Anderen, a highly-acclaimed 2006 movie which won the Academy Award for Best Foreign Language Film is to bring up its content – the East German police, or the Stasi. After watching the movie, reading Was bleibt by East German novelist Christa Wolf about being watched by the police, and discussing it in class with my professor from Germany, I developed an interest in learning more about the East German state. I decided to continue this by reading Australian native, Anna Funder’s book, Stasiland: Stories from Behind the Berlin Wall.

As the NSA/Snowden scandal is currently playing out, I would like to draw an important connection between this book and current events. In my mind, there is no doubt that the Stasi (which is short for the Das Ministerium für Staatssicherheit, or the Ministry for State Security) has created the fear of breach of security in German society. This sentiment is incredibly strong in the German society. Going through neighborhoods in Kreuzberg through Google Maps, I have found that almost half of the homes have been blurred by request of the inhabitants on these buildings. The Stasi was certainly a force to be reckoned with. I was truly amazed by a statistic that I read near the beginning of the book, which shows the power of the secret police in the East German times in contrast with other authoritarian regimes throughout history: “In Hitler’s Third Reich, it is estimated that there was one Gestapo agent for every 2000 citizens, and in Stalin’s USSR, there was one KGB agent for every 5830 people. In the GDR, there was one Stasi officer or informant for every 63 people.” (page 57) Moreover, the Stasi wielded tremendous power over society. According to the book, “the Stasi’s brief was to be ‘the shield and sword’ of the Communist Party… but its broader remit was to protect the Party from the people. It arrested, imprisoned and interrogated anyone it chose.” (page 59)

I truly loved this book – it read more like a thriller than a non-fiction book. The author weaves in between narratives of people imprisoned by the Stasi, her own personal experience trying to uncover the stories of the Stasi during 1990s Germany, and facts. It is a truly fascinating and quick read – and I encourage anyone to read it, especially if they are traveling or studying in Berlin. I found three aspects in the book particularly worth mentioning and led me to want to investigate more into these topics:

Please feel free to comment on these topics or note something interesting from the book. I look forward to hearing your opinions!
Posted by Unknown at 3:52 PM