I was born after the fall of the Soviet Union – but that does not mean that the Soviet Union was completely erased during my childhood. As a kid, I used to love looking at my grandfather’s big wall map to look for the countries I recognized. (I will admit that I am now the proud owner of this map.) I do not remember when I noticed that the map’s Russia was much larger than the on my globe at home and that it said USSR instead of Russia – but I do remember immediately asking my grandfather about it. His answers confused me even more.  I eventually just decided to come to the conclusion that: Russia did exist, it disappeared for a while and people started calling it the Soviet Union, and then it came back. Needless to say, I knew better than to ask him about what happened to Belarus and why it wasn’t on the map.

The Soviet Union did not only exist in maps when I was a child, but also in people’s minds – not necessarily in those of the younger generation, but certainly in our parents’ and grandparents’ minds. For instance, one of my grandparents still talks about the Cold War as if it is still in progress and that the United States is in constant threat from the Soviet Union. I can only imagine that these divides in generational mentality are even greater in Germany – but yet, I have yet to experience them for myself or talk about them with Germans who have experienced it firsthand. All of my knowledge about the mentalities regarding East/West divide and reunification does not come from people, conversations, or even personal experience – but from books, museums, and studies. I like gaining knowledge from both of these sources, people and experience, and so, this has been somewhat disconcerting for me.

To be honest, I expected that the East/West divide to be much greater and much more evident than it is in Berlin – this is what almost everyone had led me to believe when I mentioned that I would be moving to the city. Of course, there is a great architectural difference – but the difference seems to stop there. At least, I was unable to learn more, from people that is – given my status as a young expat without a native ability in the German language. Thus, I decided that I would read another book about the subject. I decided upon a Financial Times Book of the Year, 1989: The Struggle to Create Post-Cold War Europe by Mary Elise Sarotte. The purpose of this book is to discuss the German reunification, the possibilities that it could have resulted in conflict, and what actually occurred so that it resulted in a peaceful solution. 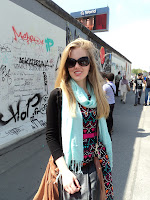 This book begins with the fall of the Berlin Wall. Although I have been unable to experience the mentality differences that persist from the division of Germany, the wall is an ever present factor in Berlin today. Although the Berlin Wall fell on November 9, 1989, its memory is all around the city and is preserved in a somewhat eerie way. I cannot tell you how many times I have looked down while walking to discover that I am stepping over a line of bricks with a plaque on the ground – noting the former location of the wall. Just last week, my friend and I went hiking on the Mauerweg – or the trail that follows where the Berlin Wall used to be. We took the S-Bahn to outside of the city to a large woods. As we spent hours walking along the trail back into the city, I think that we were both shocked about what a presence this wall used to have. Of course, many artists have used the wall for political reasons – the East Side Gallery and the wall portions near Checkpoint Charlie are two examples.

The fall of the Berlin Wall was quick and unexpected and, according to the author, could have led to a great number of results – both peaceful and disruptive. The book discusses how West Germany came to encompass East Germany without ideological compromise following the fall of the Berlin Wall. To sum up the book in one sentence: “In short, working together with Washington, the chancellor [Helmut Kohl] was able to market his vision successfully to all audiences: East and West Germany, EC and NATO allies, and Gorbachev, if not his opponents in the Soviet leadership. Of course, the marketing process cost West Germany a great deal: an extremely generous exchange rate when the currencies merged, a long series of credits, payments, and subsidies to Moscow, and the ongoing costs of propping up the economy in former East German regions after unity, to name a few expenses.” (page 201)

This quote brings up two issues, which I believe are very important to mention: 1.) what a unified Germany meant to the European community at reunification and the role of Germany in Europe today; and 2.) the discrepancies between East and West Germany which persist even today.

To be honest, I loved everything about this book – I loved its content, I loved its images and maps, and I loved how organized it was. The author presents a very clear argument and points to support this argument. Of particular interest to me were the sections about NATO to Eastern Germany. I could not help but compare and contrast the successful extension of NATO to the East as evidence in this book about Germany and the unsuccessful extension of NATO to the East, as evidenced in the book that I read about Georgia, A Little War that Shook the World: Georgia, Russia, and the Future of the West by Ronald D. Asmus.

Please feel free to comment on these topics or note something interesting from the book. I look forward to hearing your opinions!
Posted by Unknown at 4:13 PM