(For a short introduction and to view the other books I have read about Venezuela, please click here.) 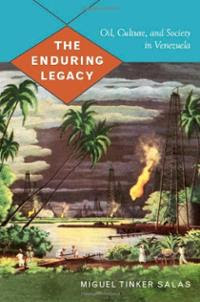 My interest in energy and environmentalism has been quite late in coming. As an artist, my mother has always been under the assumption that nothing creative can be accomplished during the daylight hours. Subsequently, I grew up in an environment of the glow of light bulbs while staying up until the wee hours of the morning – lighting up the entire neighborhood from our little home. Likewise, the recycling options in my town were dismal, and thus, I never recycled. And once I started driving, based on the way my family borrows and shares each other’s vehicles, I never found myself having to insert my card at a gas pump. My tank would mysteriously never be empty due to the generosity of my parents.

Being in Germany has, at least, added to my environment consciousness. This sentiment has certainly been magnified by the fact that I am living in the home of one of the most active Green Peace volunteers in the Berlin area. It seems like every weekend, she is going out to protest. I am never surprised to come home to find a banner laying on the kitchen table or DHL boxes filled with polar bear costumes. Every week, Green Peace volunteers meet at the apartment to discuss their upcoming mobilization plans. Needless to say, I cannot get away with NOT recycling. So, night after night, I busily divide my garbage into the garbage bins labeled biodegradable, plastics, paper, and other. (I messed up a lot when I first moved there – only to discover that my hosts had, in the early hours of the morning, dug through the garbage and fixed my sorting mistakes.)

While environmental consciousness has slowly seeped into my private life, it has likewise seeped into my academic life. A couple of weeks ago, I met with a couple of representatives from the embassy of South Sudan in Berlin to discuss the difficulties associated with the country’s development, especially as this country is very rich in oil. I felt fortunate that I was able to bring to this conversation the information in one of the books I had chosen to read about Venezuela, The Enduring Legacy: Oil, Culture, and Society in Venezuela by Miguel Tinker Salas, printed by the Duke University Press in 2009.

Instead of delving into the economic development that occurred following the extraction of oil in Venezuela, this book focuses on the unique way that the oil industry shaped the Venezuelan society and culture. Written by someone of both Venezuelan and United States heritage who grew up in the oil camps of Venezuela, this book has a very human approach and offers a particularly interesting point of view. The author asserts that, “To only address economic factors associated with this extractive industry was to underestimate the power of oil to influence society, politics, and culture. Beyond monopolizing the economy, oil shaped social values and class aspirations, cemented political alliances, and redefined concepts of citizenship for important segments of the population.” (page 238)

In order to discuss some of the points discussed in the book, it is necessary to first give some information about the development and evolution of this industry (which is interspersed in a manageable way throughout the book.) Oil was first extracted in the area around the Lake Maracaibo region, which was relatively undeveloped in 1914, when Mene Grande (which was owned by a company which would eventually become a part of Shell) first opened.  By 1938, following the nationalization of the oil industry in Mexico, Venezuela was the only country in Latin America that allowed foreign oil companies, thereby making it into a country of particular importance for the United States, especially in light of World War II. In 1928, Venezuela was the world’s largest exporter of oil, but “its share of total world trade in petroleum declined from 46 percent in 1948 to 33 percent by 1958.” (page 219) In the midst of these changes in the world economy, changes were also taking place within the Venezuelan government: In 1958, the dictator-like figure Perez Jimenez was ousted by a military coup; In 1960, Venezuela was one of the participating countries who eventually founded OPEC; and “In 1976 the government of Carlos Andrés Pérez of AD [the political party, Acción Democratica] (1947-79) formally nationalized the oil industry, compensating United States and European interests and creating a new national corporation, Petróleos de Venezuela (PDVSA.)” (page 226)

Despite all of the facts and technical information I have just shared, this book truly focuses on the development of culture and how the foreign-controlled oil industry helped shape the Venezuelan society. Some of the points which I found most interesting in this book included:

Please feel free to comment on these topics or note something interesting from the book. I look forward to hearing your opinions!
Posted by Unknown at 4:25 PM