Come Back to Afghanistan: A California Teenager’s Story 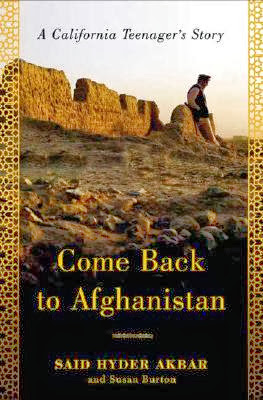 How do I even begin trying to write about Afghanistan?

Well, when I was nine years old, the Twin Towers fell. Nine years old was a hard age to deal with something of that magnitude because I was just old enough to be told what was going on, but not quite old enough to understand it. It was an unprecedented event and no one knew how to react. I remember the morning of September 11th, 2001 well because my 4th grade class was interrupted by a school administrator, who announced to us what had happened. The rest of the day was kind of a blur. I think I remember walking by the school library with a bunch of faculty members crowded worriedly around a television. It was there that I saw a plane crash into one of the buildings. I was the only student in my classroom who had ever been inside the Twin Towers and was thus subjected to the questions of my fellow peers – a very scary experience for me. Parents picked up their children early from school. I was picked up at the normal time, but by both of my parents – an unusual occurrence. My father was never one to withhold information from me and so when I asked “Why did this happen?”, I found myself overwhelmed by information about Osama bin Laden, Al-Qaeda, the Soviet Union, the Taliban, and a place I had never heard of: Afghanistan.


That was the first time I had ever heard of the country and needless to say, my child’s mind associated it as a place of violence, fear, and hatred. The next day at school, the teacher gave us each a sheet of paper and told us to write down our thoughts. For the ensuing time (it seemed like hours), a visitor could have heard a pin drop in the classroom full of about twenty nine-year-olds drawing pictures of burning buildings with magic markers and writing letters to Mr. bin Laden, asking him “Why?”

Later that year, the United States went to war – a war that has lasted twelve years and counting. As a nine year old, when I heard that we went to war, it made me feel safe: There would be no more planes flying into towers. The adults (the politicians, the soldiers) would take care of the problem and my country would go back to being the peaceful, safe place I had always thought it to be. But, as time passed and the war dragged on, I realized that the problem wasn’t being solved. By the time I was a teenager, I began to wonder if we were possibly creating more problems than we were solving. By the time I reached my twenties, I became exasperated with it all: I was tired of my country being at war for well over half of my life. I was frustrated with our leaders for not fixing these problems and for the generation before me for not demanding that they solve them. I was frustrated with the education system, which did not give my generation the background information for us to solve the problems ourselves. Needless to say, in all my years of secondary school education, Afghanistan was hardly ever mentioned. I was not taught where Afghanistan was located on a world map, what its capital was, the reasons why we went to war, and the history of Soviet invasion in the Cold War. This was all information I had to learn on my own.

Based on these thoughts and experiences, I had a very negative view of Afghanistan in my mind; and I was very worried that this would affect the book I would chose to read about the country. Subsequently, I decided that I would read many books about this country to give me as wide an understanding as possible. The first book I read is a book which I picked up at a used book sale benefiting the local library. I picked it because, firstly, it was only $1 and it looked as if it had never even been opened. Secondly, it seemed like the lightest read I could find about Afghanistan and still learn something worthwhile – an introduction into the country that would make me want to learn more. The book was entitled Come Back to Afghanistan: A California Teenager’s Story.

This book was written by Said Hyder Akbar, with assistance from Susan Burton, and chronicles his story witnessing - and often participating in - the reconstruction of Afghanistan following the fall of the Taliban. Born into an Afghan political family that had sought refuge in Pakistan following Soviet invasion, Hyder Akbar was brought up in California, where he attended school. When he was a teenager and following 9/11, his father returned to Afghanistan, where he later took up positions as the spokesman for President Hamid Karzai (who has held the presidency since December 22nd, 2001) and as the governor of the Kunar province, an area known for its violent conflicts: “Since the fall of the Taliban, Kunar has been among the most volatile provinces in Afghanistan. The tumult is due in part to its position along the Pakistani border. As for the rest of it, you could almost say that ‘it’s in the water.’ People in Kunar will tell you that theirs was the first province to rise up against the Communist, as well as the first place to which the Arabs came during the Soviet war.”(page 135)

During the summer months, Hyder Akbar would join his father and assist him in these various positions (his native English ability proving very helpful in the process), experiencing the Afghan political environment firsthand. These were his first instances ever visiting Afghanistan, and subsequently, he approaches the country not as someone returning “home.” Instead, his voice is that of both a foreigner who finds himself befuddled by certain customs, but also as someone with a deep emotional attachment to Afghanistan. This book is filled with interesting tidbits and is perfect for someone wanting a gradual and interesting introduction to Afghanistan.

This book does not really provide any “solutions” to solving the problems of Afghanistan, but provided information that helped me gain a deeper understanding of the problems that the country is currently facing:

I will end this post with a quote from the author, which I found very interesting: “There is still a lot of goodwill toward the Americans here… The Americans did not invade this country: they helped overthrow an occupying force. Since then, they’ve decreased the detrimental influence of neighboring countries. And perhaps most important, their continued presence prevents a return to chaos.” (pages 288-9)

Please feel free to comment on these topics or note something interesting from the book. I look forward to hearing your opinions!
Posted by Unknown at 9:35 PM