Ghosts of Spain: Travels Through a Country’s Hidden Past 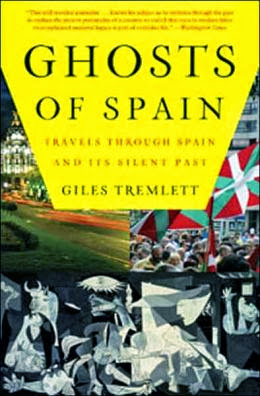 Learning the Spanish language was never an active choice in childhood or even in my teen years – it was always something thrust upon me. I took basic Spanish courses starting from kindergarten – learning the animals, numbers, colors, food, etc. We went at a very slow pace based solely on conversation (no writing, reading, grammar, etc.) Thus, when I took my first intensive Spanish course in my preteen years, I felt a bit overwhelmed by everything that I did not know. Understanding the effort I would need to put into a foreign language to gain a degree of fluency, I wanted to get out of Spanish and get into a language that I thought would be more “useful” to an opera singer, say, German or French.

But, I was unable to find myself off the hook in regard to Spanish – academic year after academic year. I thought that things might be different in college, but I was wrong. In fact, when enrolling for courses at Wofford College, the Registrar told me that I was not permitted to pick up a foreign language from scratch (German) unless I would continue with Spanish. Seeing my visible disappointment, he offered me consolation: news of a scholarship program that would send me to Chile during the January Term of my first year if I continued my language study. I do not know what I found so enthralling about this– in fact, I had hardly spent the night away from home without hating every second of it. (Thinking back on it, it was probably the teenage girl institution of the “slumber party” which I despised, rather than the actual spending the night away.)

In order to be competitive for this scholarship, I began studying Spanish by myself for hours a day every day during the summer. Needless to say, I won the scholarship. And in fact, by the time my classes started, I was placed in a 300-level language course. Within months, I had gone from lukewarm feelings about Spanish (not even willing to order in Spanish at Mexican restaurants) to giving power point presentations in Spanish-language immersion classes. My nearly six weeks in Chile, in which I lived with a Chilean family (shout out to the best host family ever – Patricio, Jeannie, and my “hermanitos,” Felipe and Raimundo!) and took Spanish-language culture classes at a local university, I discovered the person I wanted to be: flexible to new ideas and situations, multi-lingual, knowledgeable about global affairs and social issues, and open to people of all cultures. Discovering this about myself in a Spanish language environment, Spanish had engrained itself as a part of my identity.

Continuing my Spanish language studies (both in courses, books, and articles) in the United States, I noticed one thing: Latin America is presented as the helpless victim and Spain presented as the powerful conqueror. Before I found myself in Spain in fall 2011 for a semester, I found that I had been fed through my studies a very one-dimensional and closed view of Spanish society – and the worst part, I didn’t even know it until I found myself surrounded by one of the most interesting and colorful cultures I have ever experienced. With this experience in mind, I wanted to find a book that would fill in the gaps of my knowledge of Spanish diversity. I eventually decided upon Giles Tremlett’s Ghosts of Spain: Travels Through a Country’s Hidden Past.

To me, one of the most important aspects to recognize about Spain is that it is not the one-dimensional country of conquistadors. It certainly is not this now – and arguably was not this in the past. Three other languages other than Spanish, which are native to region, are still widely spoken today. Catalan, which is spoken in the region of Cataluña on the coast of the Mediterranean Sea including the city of Barcelona, boasts over 7 million native speakers. Galician, which has about 3 million native speakers, is spoken in the northeastern sections of Spain. In the Basque region (near the border of France), the Basque language (Euskara) is spoken natively by over 700,000 people. The interesting fact about this particular language is that it is not a Romance language and subsequently not related to Castilian Spanish whatsoever – a remnant of the original inhabitants of the area.

Living in Spain in the fall of 2011, the diversity of Spanish culture was evident everywhere I turned: On September 11th, I celebrated with my friends out on the streets the National Day of Cataluña. (Interestingly, this day actually commemorates a very negative event from September 11, 1714, in which the Catalan forces were defeated by the Spanish forces in the War of Spanish Succession.) In the news, bull fighting had just been outlawed in Cataluña because it was not a native cultural tradition of the region and only attracted tourists to the shows, who had no interest in the traditions or the well-being of the bulls or the bullfighters. The terrorist group ETA, which had fought for Basque independence and separation since 1959 (under the Franco regime), had just declared a cease fire. Photographs of the terrorists, their faces masked by white sheets, covered the front pages of newspapers, as the people questioned if it could possibly be the end. I was very pleased with this book, because there was one chapter dedicated to each of the distinct cultures of Cataluña, Galicia, and the Basque region. The author brought up some very interesting points:

However, what I find most interesting about this book was its descriptions of Francosim, and particularly the actions – or lack thereof – of Spanish society to cope with the legacy of this fascist dictator. Franco came into power in Spain after a bloody Civil War, which lasted from 1936 to 1939. (Many of you might be familiar with Picasso’s famed Guernica, which portrays an attack on civilians from the Nazi Luftwaffe in order to provide support for General Franco.) Just like the leaders of fascist Germany (Hitler) and Italy (Mussolini), Franco ruled with authoritarian power and severely limited the rights of his people. However, he ruled until his death in 1975, after which he requested that the monarchy be restored under King Juan Carlos, under the assumption that the King would uphold his National Movement.

Needless to say, that didn’t happen. “Within three years of Franco’s death in 1975, the king had not only buried the Movimiento Nacional principles that he had once sworn to uphold, he had buried the Moviminto altogether. By the end of 1978 Spain had become a democracy. Francoism was dead, the Movimiento had been dissolved and the voters were happily piling earth on the graves of both. It was a remarkable transformation. It saw Juan Carlo himself shed almost all his powers to become the largely, ornamental head of a constitutional, parliamentary monarchy. He is in that sense, Europe’s last true king – the last monarch to have had the powers of a ruler. No other living European monarch has enjoyed such power, or given it all up.” (page 89) However, it is important to mention that because of this peaceful change from dictatorship to monarchy to constitutional monarchy, that justice has never truly been granted to the Spanish people. The author notes that “Francoism never has been placed on trial (unless the varied judgments of historians count.) Silence was at the heart of Spain’s transition to democracy – enshrined in the pacto del olvido [The Pact of Forgetting.]” (page 81)

Please feel free to comment on these topics or note something interesting from the book. I look forward to hearing your opinions!
Posted by Unknown at 10:09 PM