The Road of Lost Innocence 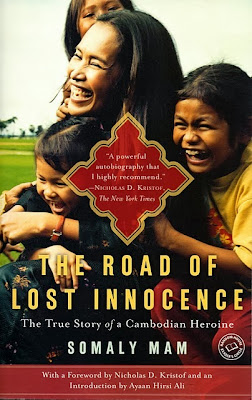 Reading: In no other form of communication is the mind both so engaged and reflective at the same time. In regard to “engagement”: when a person reads, this person is creating mental images, imagining the sounds and smells, and bringing the characters to life in his/her own mind based on the written words of the author. In regard to “reflection”: based upon the intrinsically private nature of the activity of reading, the reader develops personal connections to the words and opinions about the assertions of the text.

As a child, every time I experienced something difficult, I dove into a book. My books of choice were always about the Holocaust. When I read, not only did I learn something new, but I also felt so much better about my relative hardship after reading a book like that. A few months ago, I experienced one of the greatest disappointments of my life. In the aftermath of that disappointment as I struggled to put myself together, I rediscovered reading as a means of very important therapy. As I read about genocide, war, starvation, and human trafficking, I felt hope for my future. If these people I was reading about could not only survive these impossible conditions but also overcome them, then I most certainly could overcome my situation, as well. It is with this in mind that I introduce the second book I read on the country of Cambodia, Somaly Mam’s memoir entitled: The Road of Lost Innocence: The True Story of a Cambodian Heroine.

I have recently developed an interest in women’s roles and rights around the world. As my grandmother was an ESL teacher to immigrants from South East Asia, I already knew that there was a huge divide between men and women in this area of the world. I grew up with stories about how my grandmother befriended a former prostitute and helped her learn English; how older Vietnamese men would often ask how much they would have to pay to marry my then-teenaged aunt; and how gangs would recruit young men leading them to abandon their families. I wanted to learn more about the region and Somaly Mam’s memoir did not disappoint.

Somaly Mam was born in the mountainous region of Cambodia during the rise of the Khmer Rouge. An ethnic Phnong and abandoned by her family, her childhood in the traditional village was overall very peaceful, as the region was generally overlooked by the Khmer Rouge regime. One day a man claiming to be her grandfather “claimed her” and brought her to another village. Now belonging to this man and not challenging his authority over her due to Cambodian respect toward elders, she earned him money through household chores for others. Beating Somaly on a regular basis, he sold her virginity to pay off some debts and then later sold her as a bride to a violent soldier, who both beat her and raped her. When her husband disappeared, her “grandfather” came back to claim her, took her to the capital city of Phnom Penh, and sold her to a brothel, where she became a sex slave.

A sex slave for four years, Somaly Mam was tortured and raped by the owners of the brothel. After trying to run away, Somaly found her willful spirit broken. She was tortured, not through the traditional punishments of solitary confinement and snakes, but rather by the use of maggots. The brothel owners would put them into her hair and mouth as she was sleeping. A native Phnong with dark features, she was considered “ugly” and was subject to even harsher treatment by both the brothel owners and the clients. One day, she had the “luck” of meeting a western aid worker and started a relationship with him, leading her to escape brothel life and become a prostitute for westerners. Her life changed once again when she married a French man, who brought her to France where she learned to speak French, developed her self-confidence, and worked for an honest wage for honest work for the first time in her life. After returning to Cambodia with her husband, she found herself with the passion, the power, and the skill set to help girls trapped in the situation which she had escaped. What started as an education and medical treatment program, Somaly began to rescue girls from the brothels – smuggling them away and providing them with the opportunity to learn a trade. Her organization, AFESIP conducts raids on brothels, provides shelter for rescued women, seeks legal justice for women, as well as conducts education seminars for men about the realities of the sex industry. The organization has expanded to Laos, Vietnam, and Thailand. For her work, Somaly has been regularly threatened – once with a gun to her head.

It was noted in the Foreword written by Nicholas Kristof that “there’s growing recognition that trafficking is one of the great human rights injustices of the twenty-first century and that more women and girls are now trafficked into slavery annually than slaves were transported to the New World at the peak of the transatlantic slave trade” (page x.)  Being trafficked often means death for these women, especially with the prevalence of HIV/AIDS in this industry. (It is widely believed in the developing world that sex with a virgin can cure the disease, meaning that more - and younger - girls are brought into the industry.)

I would highly recommend this book to anyone. Although it goes through some dark places, it is ultimately a story of hope and the tenacity of the human spirit. A woman, uneducated and sold into prostitution, in a broken country is using her testimony to bring the issue of human trafficking to the world in order to end it. More than her testimony, I was left pondering three main topics that were touched on briefly in the book:

Please feel free to comment on these topics or note something interesting from the book. I look forward to hearing your opinions!
Posted by Unknown at 10:14 PM