The Snow Lion and the Dragon: China, Tibet, and the Dalai Lama 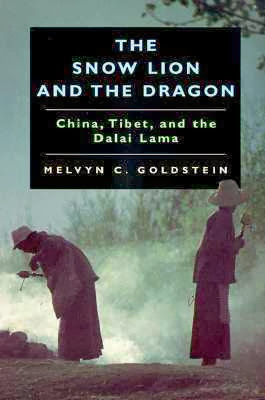 I have to admit, on that day, I was beyond excited. I forsook all of my studies for exams the upcoming week for the opportunity to attend my first legitimate “Spanish” party. The occasion was watching the Barcelona-Madrid soccer game on television. It was hosted by a group of Spaniards/Catalans at a Spanish/Catalan guy’s house out in the countryside of Catalonia. All there was to eat was white bread and red meat and all there was to drink was various types of alcohol. (A feast planned by Spanish men, indeed!) And I was the only one from the USA invited.

Most of the people at the party were typical European professionals – multi-lingual and well-traveled. I loved it – I was never without an interesting conversation partner. And, even when there was a lull in conversation, I would often just switch languages just for the practice of it. Conversations in Catalan, Spanish, Italian, English, French, and Mandarin Chinese could be heard when there was a lull in the game (which wasn’t very often.)

After the soccer game and before the dancing began, I found myself outside around the grill with a group of Spanish guys. One of them smiled at me, leaned over, and whispered: “Watch closely. Spain has 46 million people and 46 million potential presidents every election.” I stood with him in the background and before my eyes, I saw an argument unfold – a passionate argument, growing ever-louder, spurred on by the vast amounts of alcohol being drunk – about the fate of Tibet. Just when I thought the score was settled, the argument was further complicated by the presence of a woman from mainland China, who vehemently opposed the Dalai Lama and saw China’s involvement in Tibet as a means of supporting development, rather than a violation of human rights. I am not exactly sure how the argument ended, but one man finally threw his hands up into the air in frustration and sulked into the house. A large faction followed him. Never before had I attended a sports-viewing party with such an engaging and passionate debate. Of course, I knew some about Tibet, but decided at that point in time that I certainly needed to learn more.

One of my Chinese friends expressed her disapproval when she saw that I did not have a book on my blog that focused on Tibet. She found some music videos from China on Youtube that celebrated the Tibetan culture – exclaiming to me that Tibet was an integral part of China and helped make her country unique. It was her encouragement that led me to purchase The Snow Lion and the Dragon: China, Tibet, and the Dali Lama, from a local used book store. Published in 1997 by the University of California Press, this book was written by Melvyn C. Goldstein, a professor at Case Western Reserve University.

Tibet, which is an autonomous region located in the southwestern region of the People’s Republic of China, has a unique culture and development, as well as geography. Bordering the countries of India, Nepal, and Bhutan, Tibet covers a great deal of the Himalayan Mountain Range. Tibet indeed poses a very difficult question, which the author describes as:

“The Tibet Question, the long-standing conflict over the political status of Tibet in relation to China, is a conflict about nationalism – an emotion-laden debate over whether political units should directly parallel ethnic units. This question pit the right of a ‘people’ (Tibetans) to self-determination and independence against the right of a multiethnic state (the People’s Republic of China) to maintain what it sees as its historical integrity.” (page ix)

This book is a brief overview which details the complex history between China and Tibet, starting from the seventh century CE, when the two regions became unified under the dynasty started by King Songsten Gampo. As my knowledge of Chinese imperial history leaves a great deal to learn, I found some of the information flying over my head. However, there is one thing for certain: Tibet was able to retain its autonomy of religion and its own culture only through the tactful political maneuvering of its leaders. It is also important to note that by the 18th century, the Dalai Lama had lost its political power and had become solely a “spiritual figurehead.” (page 17) The relationship between China and Tibet became increasingly complex when the British conquered Tibet in 1904.

To be honest, I had no idea about the western colonial forces at play in Tibet before I read this book, however these forces helped determine Tibet’s fate following World War II. Britain’s post-war priority was the decolonization of India, and subsequently, when Mao’s forces invaded Tibet in 1950, the Tibetans did not receive any western aid or support. At first, the communists tried to provide the Tibetans a certain degree of autonomy. However in 1959, the Tibetans attempted to expel the Chinese in a failed uprising after which, “Buddhism was destroyed and Tibetans were forced to abandon deeply held values and customs that went to the core of their cultural identity. The class struggle sessions and the constant barrage of propaganda contradicting and ridiculing everything they understood and felt, sought to destroy the social and cultural fabric of the Tibetans’ traditional way of life.” (page 60)

In the 1980s, the Dalai Lama began on a very successful international campaign to bring attention to the Tibetan question. This campaign truly made an impact – if not politically, at least in the hearts and minds of people around the world. In Germany, I was shocked by the sheer magnitude of books by the Dalai Lama available for purchase (especially in comparison to the amount of available literature by other religious leaders around the world.) In the midst of this campaign, China has changed its policy toward Tibet –essentially, ensuring a certain level of development that the Tibetans could not achieve on their own. “The cornerstone of the central government’s new policy was (and is) economic growth and modernization – accelerating economic developing in Tibet by providing large subsidies for development projects aimed at building infrastructure and productive capacity.” (page 93)

Please feel free to comment on these topics or note something interesting from the book. I look forward to hearing your opinions!
Posted by Unknown at 9:34 PM