A Thousand Hills: Rwanda’s Rebirth and the Man Who Dreamed It 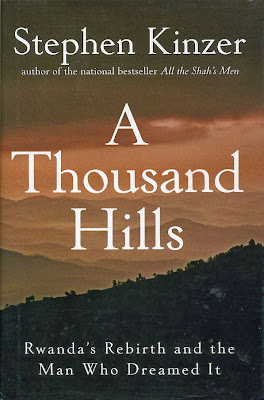 My best friend in the entire world is a Rwandan genocide survivor. If you take a look at Angelique, you wouldn’t guess that she had experienced such unthinkable brutality in her life. Always dressed to fashionable perfection with coifed hair and carefully-applied makeup, the first thing that you will notice about her (beside her breathtaking beauty) is her broad smile. We became fast friends during our first year of college and quickly began referring to ourselves as “sisters.” I loved sharing with her my culture. (I will never forget her surprise when she discovered that more ice cream flavors than “chocolate” and “vanilla” existed.) And in turn, I loved learning about Rwanda. (Likewise, I will never forget when she facetiously shared with me the number of cows her dowry would be now that she had studied in the US.) She bought me beautiful Rwandan clothes and attempted to teach me how to dance in the traditional style, as well as speak some of her native language of Kinyarwanda. She ate Thanksgiving turkey at my house, attended an opera with me, and went kayaking in the North Carolina lakes with my family.

I never asked about the genocide. It is an extremely sensitive topic and I figured that she would share that with me if she wanted to. Months after we first met, she opened up and shared with me some her story. Just four years of age when the violence broke out in April 1994, she remembered everything – the massacres, the death, and her family’s escape. Her story is not mine to tell, and so I won’t share it on this blog. I will just share how I felt when she finally told me her story as we were driving along in the car. I was awestruck and felt completely numb. I didn’t cry (neither did she), but it took every ounce of effort to keep my thoughts on the road. 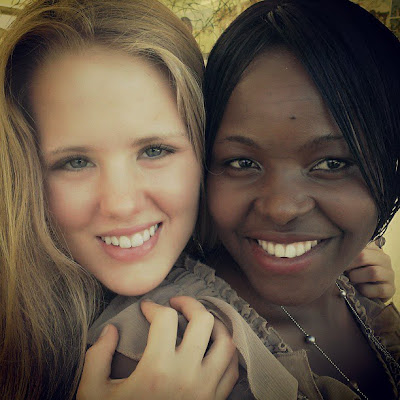 I felt so inadequate. After hearing about the unspeakable hardships she had overcome, I had no reason – nor any right – to complain about the so-called “hardships” of my life.  It was then that I recognized myself as a United States American, blessed beyond all belief: I had never seen someone killed, I had never experienced a single day of hunger, I had electricity (and cable) every day of my life, and I lived in the superpower of the world. I looked over at Angelique and was amazed by her strength of character. It was then that she broke out into song. Looking straight ahead, she started to sing in French a beautiful melody which I recognized as a hymn. It was one of the most beautiful sounds I had ever heard in my life.

Needless to say, Rwanda holds a very special place in my heart and I decided to read several books on it. The first was Stephen Kinzer’s well-reviewed book, A Thousand Hills: Rwanda’s Rebirth and the Man Who Dreamed It. The title refers to President Paul Kagame, one of the most well-known and dynamic leaders in all of Africa. He not only led the Rwandan Patriotic Front (RPF) which liberated the country, he set the path for development by acting as Vice President for the six years following the genocide and as President since 2000.

For those of you who need a refresher course in Rwanda history, Rwanda is a tiny landlocked country in East Africa – surrounded by the countries Uganda, Tanzania, Burundi, and the Democratic Republic of the Congo (formerly called Zaire.) It first found itself under German colonial control up until the aftermath of World War I, after which it fell into the hands of Belgium. In order to administer the country, the Belgians magnified the existing differences between the two ethnic groups, Hutu and Tutsi, in order to divide them and better ensure the country under their control. Interestingly, both of the ethnic tribes spoke the same Kinyarwanda language. It is also important to mention that before the arrival of the Europeans, Rwanda had a very different idea of kinship and tribe than we hold in the West: “Tutsi constituted the governing class, tended to be taller than Hutu, and raised cattle rather than tilling the soil. Little else of substance, though, separated the two groups. It was even possible for people to move from one to the other. If a Hutu became an owner of many cattle, he also became a Tutsi; a Tutsi family that turned to farming would eventually become Hutu. Intermarriage was accepted and communal conflict was all but nonexistent.” (page 23) In the midst of the process by which Rwanda gained independence in the late 1950s and early 1960s, ethnic tensions had developed to the point that the ethnic Hutu majority conducted a mini-genocide against the minority Tutsi. (These ethnic tensions had been particularly inflamed by Belgian colonization. At first, the Belgians utilized and empowered the Tutsi aristocracy to administer the country in a form of indirect colonization. Later, in a process called reverse favoritism, the Belgians began to support the Hutu in order to gain a stronger foothold in the country.)

In April 1994, the Rwandan genocide began in full force, with Hutus massacring Tutsis mercilessly (often with machetes) in locally-organized death campaigns. Within three months, an estimated 800,000 to 1 million Tutsis and moderate Hutus were killed (including the moderate Hutu Prime Minsiter Agathe Uwilingiyimana.) Paul Kagame and his RPF Army gained control of the country, but found themselves in possession of a broken state: “The devastation counted Rwanda itself among its victims. More than 10 percent of the population had been murdered in the space of a hundred days. At least another 30 percent had fled or was fleeing. There was no government or security force. Even if any institutions had remained, there would have been no one to run them. Nor was there any cash; leaders of the old regime had fled with every cent in the treasury…” (page 181) In regard to development, Rwanda faced an incredibly daunting task, especially in regard to the psychological effects of genocide on its population: “99.9 percent of Rwandan children witnessed violence during the spring of 1994. Ninety percent believed they would die. Eighty-seven percent saw dead bodies, 80 percent lost at least one relative, 58 percent saw people being hacked with pangas, and 31% percent witnessed rapes or other sexual assaults.” (page 253) ­

This book is a very interesting book in that it not only describes the genocide, but also the post-genocide Rwanda, headed by Paul Kagame. Indeed, Rwanda has changed a great deal since the genocide and is now viewed as somewhat of a success story. Looking upon the Asian tigers (with their limited forms of democracy and their authoritarian-style visionary leaders) as his model, Kagame developed lofty goals for his country: “Since Rwanda has few natural resources and is too small for large-scale agriculture, the new government concluded that it needed to find another niche. It proclaimed a new mission: to make Rwanda the trade and commercial hub of East and Central Africa, a region awash in resources but plagued by poverty, corruption, and paralyzing inefficiency.” (page 227) Certainly, the country is well on its way to this goal and was actually ranked #3 in the Sub-Saharan Africa region in the Heritage Foundation’s 2013 Economic Freedom Index, following only Mauritius and Botswana. That being said, there is no clear consensus in the international community about the legacy and the power of Kagame. The question remains as to  “…whether President Kagame is a prudent leader who limits freedom only to the extent necessary to safeguard his people or an instinctively repressive one who overstates threats in order to protect his own personal power. In no other country does the opinion of Western human rights groups clash so directly with that of diplomats and antipoverty activists.” (page 326) This book provides very interesting insights into this question and I would highly recommend it to anyone wanting to develop a deep working understanding of the issues facing Rwanda today.

(This post is dedicated to A.I.N. - the most wonderful and beautiful sister anyone could ever ask for. I am so proud of you and cannot wait to see the miraculous plans that God has in store for you. Jeremiah 29:11)
Posted by Unknown at 8:40 PM