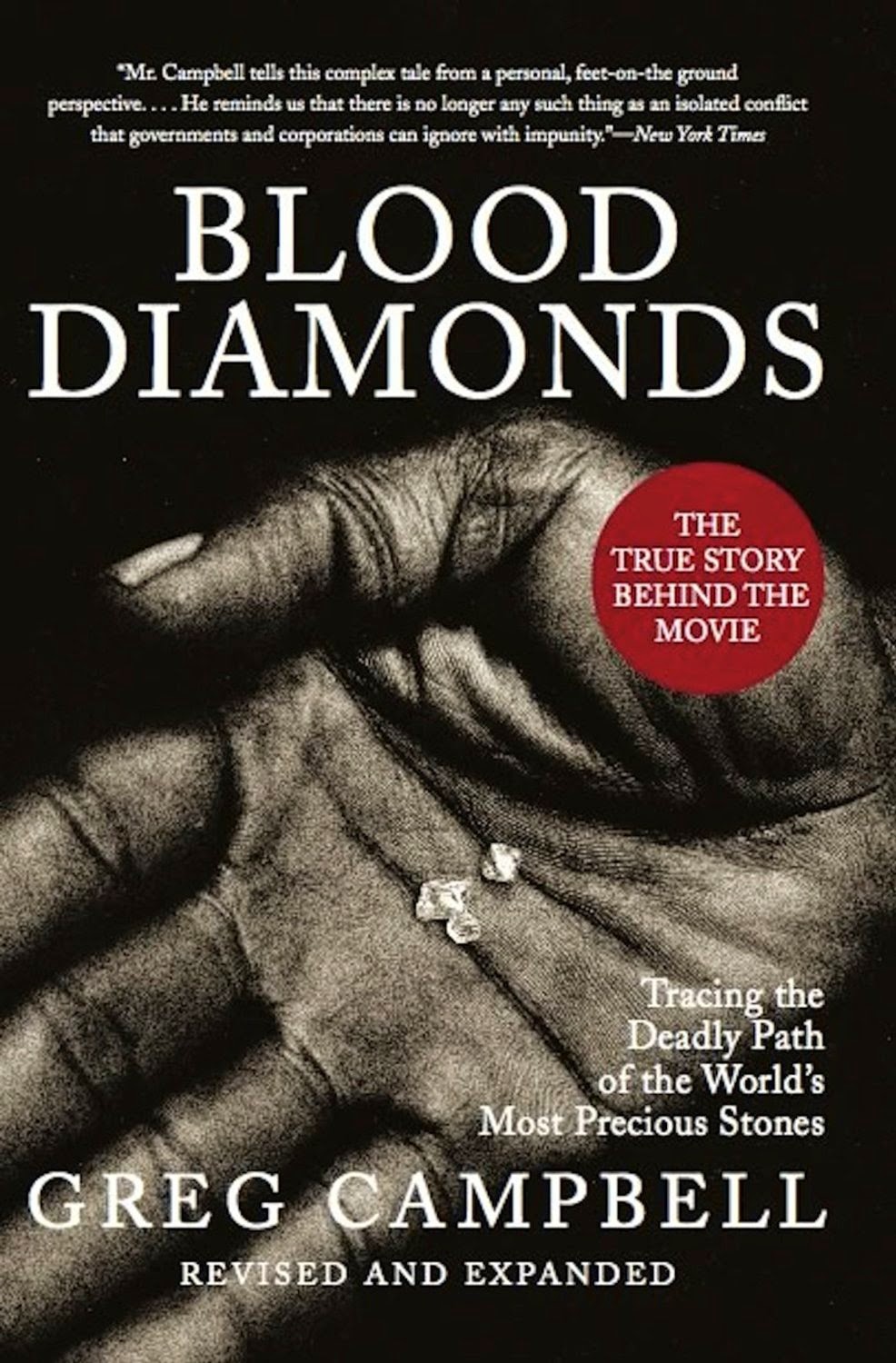 If you take a look at the books I have purchased for my Kindle, you might swear that there is no way that the Kindle belongs to me. While my physical bookshelf is filled with heavy reading material on international relations, genocide, economic development, and feminism (just to name a few topics), my Kindle is filled with “fluffy books,” or the books I would feel embarrassed carrying around - including all of my opera gossip books and conspiracy theory books.

Other guilty pleasures of mine on my Kindle are the exposés of different industries. This particular trend started with a book about the wedding industry in the United States, which I enjoyed immensely. Unlike many of my peers during girlhood, I never spent any energy imagining my future wedding. In their childhood fantasies, whenever one of them would come up and ask to be one of my bridesmaids, I would nonchalantly oblige, as it seemed to make them happy. (Side note: They must have recognized my disregard because I have yet to be asked to be a bridesmaid. I opted, however, for a more capitalistic approach, participating in ceremonies as a paid vocal soloist instead.) One Perfect Day: The Selling of the American Wedding delves into where our society’s traditions developed (from the white dress to the honeymoon), as well as the social pressure to create the “picture perfect” wedding, exacerbated by social media. For instance, I found it fascinating to note that wedding magazines never actually change content from year to year – because there is a new batch of consumers each year, solely wanting to recreate the weddings and the parties of their peers.

I share all of this about weddings and social conventions to bring up the topic of diamonds. Indeed, in the western world, we have very strong connotations associated with diamonds: the devotion that is represented by a mineral that will last “forever”, the diamond has become the ultimate sign of commitment in the modern era. This positive image of diamonds is certainly embedded into children at an early age and reinforced in every form of media. However, for the last fifteen years or so, diamonds have gotten more and more negative attention; the subject of countless muck-racking reports. Personally, I remember the first time I heard a negative opinion about diamonds when I was twelve years old: I was standing in line at Starbucks behind a quintessential feminist out on a date. Wearing no make-up, dark clothes, and sporting wild frizzy hair, she launched into a tirade about how we were all being tricked by the diamond industry and how she would not accept a diamond ring from him [her date] if he ever tried to give her one. (Based upon the aghast expression on his face, it was evident that he had not ever considered that notion before.) Her argument was simple: the world’s supply of diamonds was controlled and limited in order to keep prices of diamonds high. Otherwise, they would fall substantially and probably be even less expensive than other precious stones, such as rubies and sapphires.

It would be only shortly after that I would learn about the infamous De Beers diamond company – through the “Diamond Music” of famed modern classical composer Karl Jenkins, used in diamond television commercials. De Beers is a particularly interesting and historical company: it was the company which first marketed diamonds for engagement rings (created the demand for such a stone), knowing full and well that they controlled the supply. On the subject of De Beers, I would like to share with you two quotes: These quotes come from the second book I read about the country of Sierra Leone, Blood Diamonds: Tracing the Path of the World's Most Deadly Stones by journalist Greg Campbell. While the first book I read on the country was a deeply personal account of a boy soldier who found himself fighting in the midst of the country’s chaos, this book takes a vastly different approach: it discusses the reason for the conflict and the reasons why the conflict erupted into one of the bloodiest and most horrific civil wars we have seen in recent years. (Many of my readers will probably never be able to forget the searing images of many mutilated civilians in Sierra Leone with purposefully amputated limbs.) The author argues that the cause for the bloody extent of this conflict is the diamond industry.

I really loved the author’s description of Sierra Leone in the introduction: “Actually, to refer to Sierra Leone as a ‘country’ at all is only a matter of geographical convenience. In fact, it’s a vacuum of violence, poverty, warlords, and misery, a tiny corner of West Africa where the wheels have fallen completely off and left no one in charge except whoever happens to the best armed at the moment." (page xx) In this paragraph, he is referring to the Civil War which plagued the country throughout the 1990s. However, he also delves into the historical reasons for division in this particular country. Chosen by British abolitionists as a colony for freed African slaves, Sierra Leone became one of the most diverse colonies in all of Africa. On top of the indigenous tribes with traditional, animist beliefs, it was the home to thousands of former slaves introduced to Western culture in the Americas. The author even notes that in the capital city of Freetown lived over 100 different ethnicities during the 19th and 20th centuries – comparable to a mini-New York City.

In the early 1990s a group of men called the Revolutionary United Front (RUF) began to revolt against the All People’s Congress, the one political party which had held power since the 1960s. At first, the movement was seen as a legitimate vying for power as a peasant revolution to bring down the wealthy ruling class of the capital of Freetown. Recognizing that the only way that they could control the outcome of the war was to gain control of the diamond mines in the middle of the country, RUF concentrated all of their efforts in rural areas. However, “instead of rolling into the diamond areas and seeking the support of the locals, the RUF killed and mutilated them. Composed of mostly uneducated youths with no other outlet for their sense of disenfranchisement, the RUF was quickly revealed as an army or murderous thugs rather than justice-seeking rebels” (page 71) The result of this action on the part of the rebels was absolute chaos in Sierra Leone - creating a African civil war positively unique in the fact that it was based very little on ethnic divisions. Instead, what side a person would end up on depended much more on being at the wrong place at the wrong time, as Ishmael Beah’s memoir describes so eloquently.

With control of the diamond fields, RUF illegitimately allowed millions upon millions of diamonds to be exchanged directly for arms to support its military movement. This proved to be especially dangerous and indeed directly harmful to the West as “The [RUF] rebels helped Osama bin Laden’s group launder millions of dollars in cash.” (page 194) Wanting as much money as they could get their hands on, they helped liquefy Al Qaeda’s assets from cash into easy-to-smuggle diamonds right before the 9/11 attacks.

This is a fascinating book which shows how, in our interconnected global world, we can unknowingly and naively participate in civil war. Blood diamonds have become very popular as a topic of conversation. Not only has it been featured in countless documentaries, such as this one by National Geographic, but it was also highlighted in a Hollywood film, featuring Leonardo di Caprio.

I think the concept of blood diamonds is disturbing to many people because the shiny diamond a woman wears on her finger is not that far removed from the raw diamond that the amputee, whose family had been killed, mined for i­n the RUF-controlled diamond field. We can mentally picture the author’s descriptions, “The pit looked more like a slave colony than the first step on the journey of a diamond that would end up in one of the world’s largest and most profitable international luxury-commodities market.” (page 6) However, I would like to encourage my readers to look beyond the topic of “diamonds” as only a single, isolated problem that has now passed. As consumers, we should at least attempt to hold ourselves accountable – and if not change our buying habits, at least give consideration for the processes by which our products came into our hands. It isn’t just diamonds which wreak havoc on Africa. Our cell phones are likewise made from conflict materials, such as coltan and tantalum, as noted in these articles from The Guardian and Businessweek.

Please feel free to comment on these topics or note something interesting from the book. I look forward to hearing your opinions!
Posted by Unknown at 8:40 PM