They Poured Fire on Us From the Sky: The true story of three Lost Boys from Sudan 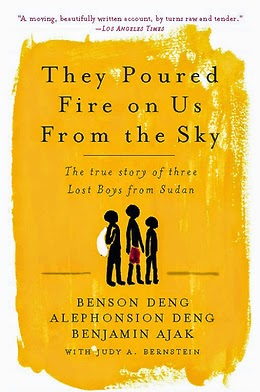 I have talked a great deal about my best friend, Angelique, on this blog. However, I have never told the story in which we became best friends, instead of just close acquaintances. It happened during our undergraduate orientation, before classes began. We had been engaged in school-sponsored activities outdoors all day, and, we both happened to go in the same restroom before dinner. I was washing my hands when I heard Angelique cry out in alarm, “Oh Emily! Look at your skin – look at your skin! You are turning red!”

I looked into the bathroom mirror and saw one of the most embarrassingly uneven sun burns I had ever gotten in my life. Normally, I would have been so frustrated with myself and my stupidity for not reapplying sunscreen throughout the day, but as I stared at Angelique’s face full of worry, I started laughing. “Don’t worry, Angelique! It’s just sunburn. It is what happens to white people’s skin when they are out in the sun for too long – they turn red!”

Realizing what had happened (and, most importantly, that I had not contracted some horrible illness), Angelique began laughing, too. She was fascinated by the strange new pigment of my skin and asked me a thousand questions. Comically, I suppose that I could say that Angelique and I ultimately became best friends over sunburn – but there is certainly something more to it than that. At that singular moment, we both became aware that despite our vast differences of experiences and culture, we could find common ground. It set a precedent for acceptance and appreciation of one another – as our differences were something that we could learn from and even laugh about; not a reason to feel self-conscious or threatened.

When I think back on that experience of Angelique’s first introduction to sunburn, I am always reminded of a scene in the documentary, God Grew Tired of Us. This particular documentary focuses on the stories of a few of the so-called Sudanese Lost Boys, who are given the opportunity to come to the United States as refugees. Although it covers some of their past, it mostly focuses on the difficulties of transition, especially the cultural difficulties of transition. The scenes which I will never forget are as the Lost Boys travel from their home refugee camp in Africa to the United States and their bewilderment as they encountered manifestations of modernity, which they had never seen before: escalators, automatic water faucets, intercoms, butter packets in the airplane meal tray, etc.

It was with this powerful documentary in mind that I purchased “They Poured Fire on Us From the Sky” on sale at the World Bank Bookstore in Washington DC. (Just for the record: this place has the best books and the best sales ever! I never walk out with less than three books!) I had already read a book about both Sudan and South Sudan, but I felt compelled to read this book, which is a combination of the three distinct (yet inter-connecting) memoirs of Benson Deng, Alephonsion Deng, and Benjamin Ajak. It was written with the assistance of Judy A. Bernstein.

This book was published in 2005. The documentary was released in 2007. This is noteworthy because South Sudan did not become a country until it gained its independence from Sudan in 2011. However, it is important to mention that a full-blown Civil War is what prompted independence and that there continues to be a lot of conflict in both countries. (The Darfur conflict/genocide is actually in West Sudan and South Sudan continues to be plagued in post-independence struggles and insecurities.) In the introduction, Judy Bernstein discusses the conflict which led to South Sudan’s independence in simple, yet understandable terms: “Ignited in 1983, Africa’s longest-running war is still going on. North against south, Muslim against animist and Christians, Arabs against blacks. Huge oil reserves in southern Sudan being held by the northern Muslim government fuel the war. Race, religion, and riches. The same things people always kill each other over. With no solution in sight, 2 million blacks in the south have already died. More casualties than Angola, Bosnia, Chechnya, Kosovo, Liberia, the Persian Gulf, Sierra Leone, Somalia, and Rwanda combined.” (page xvii)

The Lost Boys is a term that refers to the over 20,000 young boys from the South Sudanese Dinka and Nuer tribes who traveled by foot across Sudan to escape the destruction of their villages during the Sudanese Civil War (from 1983 to 2005.) They fled to refugee camps in both Ethiopia and Kenya, respectively. This book covers the stories of three of these boys, who experienced many hardships and saw the deaths of many of their friends.

Benson Deng notes the difficulties that the boys faced in refugee camps in Ethiopia, a neighbor of Sudan which had been generally peaceful: “We were starving and the Ethiopians were experiencing hard times because we were stealing their food. There were thousands of people, many of them boys, but no houses or latrines. Everyone in the camp, ten thousand boys already and more coming, went into the bush for latrine.” (page 89) However, this political situation also manifested itself in their own expulsion from the country later on: “Then war found us again once more. The Ethiopian government had been overthrown by guerrilla fighters called the Ethiopian People’s Liberation Army (EPLA). Before we could harvest, the Ethiopian people warned us to leave their country. We had to evacuate the refugee camp in a week. (page 136)

Reading the personal stories of these boys, it is amazing to see how they survived and came to live in the United States. They survived not only starvation, but also narrowly avoided being actively recruited into the South Sudanese guerilla movement, where they would have been most certainly sent to fight on the front lines against the Muslim-based government in the North. Judy Bernstein notes that however difficult it was for these boys, it was even more difficult for the girls of South Sudan: “Are there any Lost Girls? When the villages were attacked, many of the girls were raped, killed or taken as slaves to the north. Less than two thousand made the journey across Sudan. However, once they reached Kakuma, they did not live in distinct groups like the boys, but moved in with families in the general community. Less than a hundred now live in the United States. Of those still languishing in the camp, some married and other became domestic slaves. They are generally considered one of the most vulnerable groups in the word.” (page 310)

All in all, I would most certainly recommend this book – not so much for its academic content, but rather for the comprehension and insights it provides into being a child of war and without a home. With so many wars going on in the world, we often forget how many children are affected every single day. This book provides a powerful – albeit brief – reminder of the sad realities of so many.