Underground: The Tokyo Gas Attack and the Japanese Psyche 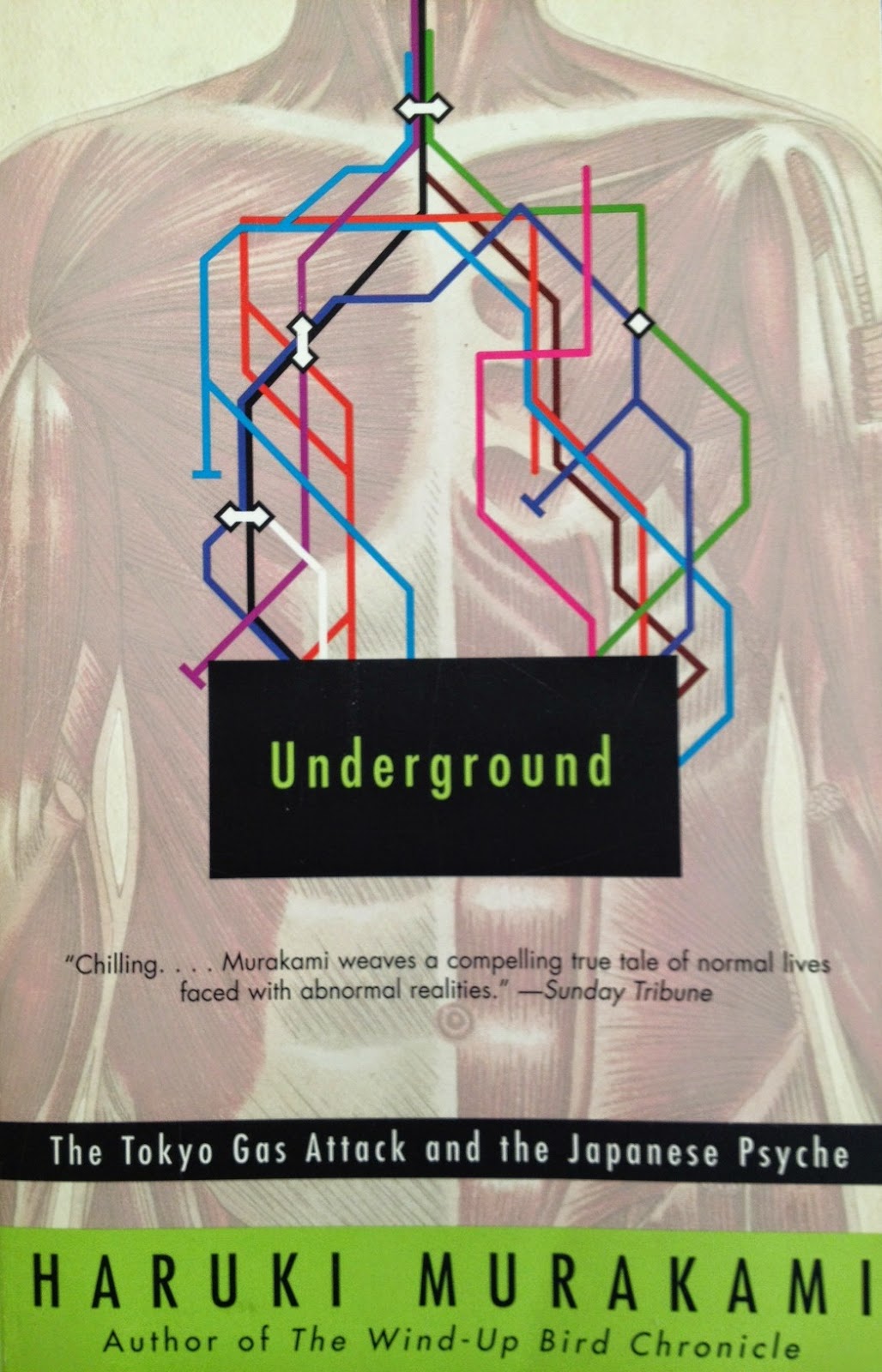 When I was young, my heroine was Athena, the beautiful goddess of wisdom from Greek mythology. To me, she seemed far superior to modern day superheroes in so many ways. I liked the way that she was born by sprouting from Zeus’s head, wearing a set of complete armor (making our human births seem barbaric in comparison!) I especially liked the way she turned her nemesis into a spider. My obsession with Greek mythology led me to choose Greece as my 3rd grade country project – which I researched meticulously, subsequently becoming the resident class expert of Homer and Aristotle. I have to confess that I may have been so obsessed with Greece that I managed to learn not a single other fact about any of the other countries my classmates presented in their country projects. All I really remember was during one of my friend’s presentations on Japan, I managed to accidentally drop all of my green tea ice cream he brought to class on my favorite dress. Somehow, in my mind, the incident became the country of Japan’s fault, leading me to look at it through a negative lens for years to come.

My interest in Japan was rejuvenated at a conference celebrating youth leadership in community service in Washington DC. (The name of the conference is Prudential Spirit of Community Service Awards – and as a side note, I recommend it because it is a wonderful way of recognizing young people and encouraging them to become leaders in their communities.) While at this conference as the delegate of South Carolina, I met two beautiful Japanese girls, representing their country as the top youth community service leaders. They hardly spoke any English – and I spoke no Japanese. The language barrier seemed to have no effect on our friendship, though. The last night during a dinner cruise on the Potomac, we sat together sharing photographs of our families from our cell phones. Despite my hesitation to engage in the festivities, when the music started to play, one of the girls grabbed my hands and triumphantly exclaimed, “Dance, Emily!” We managed to dance all night in an eclectic Japanese-American mix.

Two years later while I was studying in Barcelona, I received a shocking message. Yuki, one of the Japanese girls, informed me that the other girl, Chinatsu, had just passed away from leukemia. Yuki was collecting letters to be presented to Chinatsu’s family at her funeral and asked if I would be willing to write one. I was in shock the rest of the day. Chinatsu had given a great deal of her very brief life to help others and to build into her community’s pride by leading a revitalization project and beautifying her local train station. She consistently looked past herself in order to help others. The idea that she was gone – to me – was a huge loss. It was not only a personal loss, but also a loss of everyone affected by her generosity and sweetness of spirit.

I have never been to Japan, nor do I know many Japanese people. But, through what I have read about her country, I have come to appreciate the unique individual that Chinatsu was. Her dedication to helping others must have been like a beacon of light in her community. This idea was reinforced when I read Haruki Murakami’s “Underground: The Tokyo Gas Attack and the Japanese Psyche.” Murakami may just be one of the most popular fiction writers in the world today, but this is a non-fiction book, focusing on interviews in an attempt to better understand his own people by analyzing perhaps one of the greatest human-induced crises in the country’s modern history: a homegrown terrorist attack which shook Japan at its core.

Probably a great number of you remember the March 20, 1995 sarin gas attack that took place within the Tokyo subway system. (A good video synopsis is available here.) However, I will provide some background information, just in case. The Tokyo gas attack actually consisted of five different coordinated attacks, in which members of the Aum Shinrikyo cult released sarin gas into subway cars during morning rush hour. Twelve people died, over fifty people were severely injured, and thousands more were harmed in these attacks. Sarin is a nerve agent which in its most lethal form causes suffocation in its victims by prohibiting the nerves from communicating with the muscle of the diaphragm. Other (less lethal, but yet horrible nonetheless) effects of sarin gas include: impaired eyesight, vomiting, and uncontrollable muscle spasms. At the time of the attacks, the cult was formally recognized as a religious order in Japan and had 9,000 followers in Japan and up to 40,000 worldwide. The leader of the cult, Shoko Asahara (a man with a chip on his shoulder, as he was born into poverty and left almost completely blind from a childhood illness), was the mastermind of the attacks. (*Note: He is now awaiting execution by hanging.) In the years up to the attack, he had been hypothesizing the end of the world and having his followers believe that he was the only enlightened being, following the Buddha. Interestingly, many of his followers (particularly those who actually released the sarin gas in the subway cars) were once members of the “superelite” of Japan. They were well-off – wealthy, well-educated, and formerly possessing good jobs. The nature of this bizarre cult was difficult for the average Japanese to understand, and the news quickly became sensationalized.

It was likewise difficult for the author Haruki Murakami to comprehend – but he decided to do something about it. This book is his attempt to understand not only what happened on that day, but also how the Japanese society could have produced such a deadly cocktail leading to a homegrown terrorist attack. His justification for delving so deeply into the “macabre” is beautifully and effortlessly defended in the following quote: “If we are to learn anything from this tragic event, we must look at what happened all over again, from different angles, in different ways. Something tells me things will only get worse if we don’t wash it out of our metabolism. It’s all too easy to say, ‘Aum was evil.’ Nor does saying, ‘This had nothing to do with ‘evil’ or ‘insanity’’ prove anything either. Yet the spell cast by these phrases is almost impossible to break, the whole emotionally charged ‘Us’ versus ‘Them’ vocabulary has been done to death.” (page 226) Despite the fact that this book was written in 2000 (before the 9/11 terrorist attacks), I found his narrative incredibly compelling and indeed applicable to the modern era, as we are currently facing so much religious extremism. Murakami never outright criticizes religion, but his feelings of turmoil boil over: “People the world over turn to religion for salvation. But when religion hurts and maims, where are they to go for salvation?” (page 103)

Murakami divides his book into two parts. The first part is dedicated to the memories of the victims and the survivors of the terror attack. Although this section is ultimately written like a series of interviews, Murakami brings in a writer’s voice; describing the people involved so beautifully that it is impossible not to sympathize with them. I want to share some of the victim’s quotes which resonated with me the most. While some are quintessentially “human” in the midst of crisis, others are insightful into Japanese culture and society at the time of the attack:

The second part of the book is even more fascinating and brings the quotes that I mentioned above full-circle. In this second section, Murakami interviews former followers of the Aum cult; delving into their pasts, their dreams, and their desires. He wanted to challenge his readers to view the cult as a product of the Japanese society; even a product of Japanese imperial history. He emphatically proclaims that “we need to realize that most of the people who join cults are not abnormal; they’re not disadvantaged; they’re not eccentrics. They are the people who live average lives (and, maybe from the outside, more than average lives), who live in my neighborhood. And in yours.” (page 364) He recognizes that under different circumstances, any Japanese could have been a follower of the Aum cult.

While we in the United States might shake off Murakmi’s inquisition into the causes of the rise of the Aum cult as inapplicable to us, Murakmai makes it clear that this is not only a product of Japan, but also a product of capitalism – making it very applicable to many of the challenges we are facing in the West. He notes that “what they [the Aum followers] all had in common, though, was a desire to put the technical skill and knowledge they’d acquired in the service of a more meaningful goal. They couldn’t help having grave doubts about the inhumane, utilitarian gristmill of capitalism and the social system in which their own sense and efforts – even their own reason for being – would be fruitlessly ground down.” (page 362)

Please feel free to comment on these topics or note something interesting from the book. I look forward to hearing your opinions!
Posted by Unknown at 10:46 PM