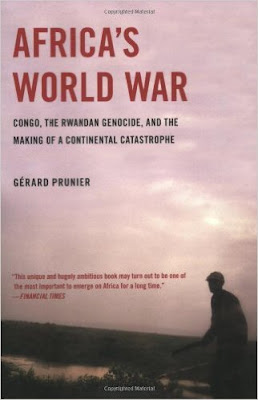 “I’d like to tell you about a country where 5.4 million people are estimated to have died since 1998 – a number of almost “Holocaustic” proportions.  The bloody conflict responsible for so many causalities may surprise some.  It is not Iraq, which has seen 500,000 deaths, nor is it the civil war in Syria, which has thus far produced 210,000 causalities. Likewise, an estimated 300,000 people have died in Darfur – while the well-publicized Boko Haram insurgency has taken the lives of around 11,000 Nigerians. The nearly inconceivable number of 5.4 million deaths occurred in the Democratic Republic of the Congo, formerly known as Zaire.”

My fingers flew across the laptop as I wrote this introduction to my recent Op-Ed about the local political resistance to a church-sponsored refugee resettlement in Spartanburg County (which would later be published by FITS News under the title “The Politicization of Refugees Needs to Stop.”) I had never intended to join the fray. When politicians started to raise concerns (unnecessary concerns, with political undertones – in my opinion), I began to write them letters as a concerned constituent. Spartanburg, one of the most prosperous communities in South Carolina, had a history of accepting refugees. My own grandmother had taught English as Second Language courses to Vietnamese, Laotian, and Cambodian refugees in the 1980s. These people had come to South Carolina knowing little English, often practicing Buddhism, and with a limited understanding of democracy. They adapted to their new surroundings and their children excelled. I even attended Wofford College with the child of one of my grandmother’s pupils!

Not surprisingly, my letters had no effect. And the elected officials continued with their highly politicized anti-refugee rhetoric, claiming that soon ISIS would be infiltrating Spartanburg. Something inside of me broke when after discovering that the first two refugees from the DR Congo had arrived, I heard a local school teacher exclaim in fear about how terrorism and anarchy were at our doorstep. I will never claim to be an expert in the Great Lakes Region of Africa, but I had read enough to know that Islamic radicalization wasn’t really the problem there, as 80% of the population claims to be Christian. In preparation for writing, I pulled out my trusty sources on the DR Congo and the Great Lakes Region (encompassing Burundi, the DR Congo, Kenya, Rwanda, Tanzania, and Uganda) to read through my notes in the margins. It was in this process that I became reacquainted with the book I read over a year ago by Gerard Punier (a top scholar on Africa, who also wrote the book that I reviewed about Sudan), “Africa’s World War: Congo, The Rwandan Genocide,and the Making of a Continental Catastrophe” (Oxford University Press, 2009.)

I will make a confession: I had actually purchased this book on my Kindle some years before, but couldn’t even make it through the first chapter. Although the book is incredibly insightful, it is not exactly for the novice on African affairs. (For example, just as “Moscow” and “Washington” are used interchangeably with “the Russian government” and “the United States government”, the reader of this book will need to have the prior knowledge to be able to match Luanda, Kampala, and Kinshasa with their respective countries.) However, after having developed a fairly strong understanding of this region, I devoured this book. The way in which the author describes history is thorough and objective, while still communicating the different interests of the groups involved in the recent conflict in the Great Lakes Region of Africa.

What has been happening in this region is extremely complicated with many different actors – both nations and guerilla groups. Therefore, instead of piecing together this complex narrative, the author blames the West by confronting the conflicts as separate interests, as well as coming up with Western pre-conceived narratives to simplify what was really going on. Even today, while most of the world hails the peace that the country of Rwanda has achieved as extraordinary, when scholars approach the conflicts of the region as interconnected, it is clear that this domestic peace has come at a high cost. Even today, there is continued prolonged conflict in the eastern Kivu region of the DR Congo (even following two wars in which Rwanda invaded the exponentially larger country.) As Prunier describes, “The Rwandese genocide has been both a product and a further cause of an enormous African crisis; its very occurrence was a symptom, its nontreatment spread the disease.” (page xxxi)

The author argues that the first conflict in the series of Africa’s World War was the Rwandan genocide of 1994, in which up to 1 million Tutsis and moderate Hutus were killed by extremist Hutu groups. This conflict spurred the mobilization of up to 2 million refugees, many of whom landed in the DR Congo on the eastern Kivu region, where extremist Hutu militia groups intent on re-entering Rwanda and topple the new government began to mobilize in the same refugee camps of everyday Rwandese civilians. Needless to say, the Rwandan government was thinking about the security of their new nation when they attacked the DR Congo: “The basic cause that led the Rwandese leadership to attack Zaire in September 1996 was the presence of the large, partially militarized refugee camps on its borders. But there was also a broader view, which was a systematic trans-African plan to overthrow the Mobutu regime in Zaire.” (page 67) The trans-African plan incorporated most of the countries of southern Africa, all of which had very negative views of the DR Congo’s dictator Mobutu, who took control of the country in 1965 through a CIA-sponsored coup. This dictator, who renamed himself “Mobutu Sese Seko Nkuku Ngbendu Wa Za Banga” translating to “the all-powerful warrior who, because of his endurance and inflexible will to win, goes from conquest to conquest, leaving fire in his wake,” built a cult of personality around himself. More importantly, sponsored by the United States in the Cold War, he let his country fall behind in development and created enemies out of many of the 1990s African regimes (such as Zimbabwe, South Africa, Namibia, and Angola) because of his sponsorship of CIA-supported maneuvers against their political movements.

When Mobutu was ousted, he was replaced by Laurent Désiré Kabila, a socialist revolutionary who “was neutral between Museveni [Uganda] and Kagame [Rwanda] and because he was under practically complete control of the Tanzanian secret services, which considered him harmless and easy to manipulate.” (page 116) However, soon Kabila began to disobey the Ugandans and the Rwandans, leading the two countries to engage in another conflict in the vast DR Congo. This time, however, was much more complicated – as many African countries had different opinions on Kabila. In fact, Gerard Prunier describes this conflict as having four different tiers, as described on page 201:


Gerard Prunier described “Africa’s World War” and the following conflicts (some of which even continue to this day) as similar to the Thirty Years War in Europe which took place from 1618-1648. Noting the similarities of these conflicts, he wrote that they occurred “…purely because of the princes’ ambitions, prejudices, and security fears. And the Congo, like Germany in the seventeenth century, was their battlefield. The violence and the meaninglessness were the same.” (page 286) Moreover, he blames the West, their non-governmental organizations (who are only sustainable through prolonged conflict and suffering), and the diplomatic community for not studying this conflict intensely and for forcing it into a western narrative, which really had very little to do with the situation at hand.  According to Prunier,  “Thus in the Western world and in the diplomatic view, the war against Mobutu appeared as a kind of holy crusade of the new against the old, of virtue against vice, an epic of reformed communists who had seen the light of capitalism and were going to bring free trade and the computer revolution to Africa.” (page 332) Essentially, by not working to understand the conflict, we have enabled the conflict and violence in the DR Congo to perpetuate and eventually lead to the 5.4 million deaths I mentioned at the beginning of this post.