Factory Girls: From Village to City in a Changing China

“Owing to the extensive use of machinery and to division of labour, the work of the proletarians has lost all individual character, and, consequently, all charm for the workman. He becomes an appendage of the machine, and it is only the most simple, most monotonous, and most easily acquired knack, that is required of him.”
-The Communist Manifesto, Karl Marx and Friedrich Engels 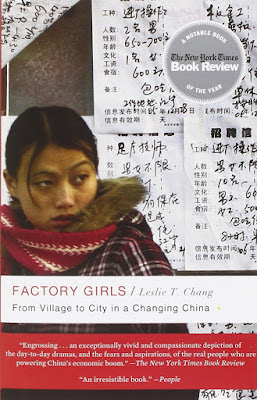 I leave for China in less than two short weeks to begin the next adventure of my life: a Masters of Law in International Relations at Tsinghua University in Beijing, China. While my life is consumed with last-minute paperwork and packing, it is also consumed with a lot of last-minute reading. I came to the realization that, in several ways, I had been coasting in my understanding of China, particularly in many of its foundational pillars. The People’s Republic of China, which was founded in 1949 after a long guerilla struggle beginning in 1927 led by General Mao Zedong, is the world’s largest communist country. However, what exactly is communism? And does China’s system truly mirror communism as its founders Karl Marx and Friedrich Engels intended it? How did Mao put his own mark on the entire communist movement? Why did China reach over ideological ties to the Soviet Union and open its arms to the West. And perhaps, more importantly, how did China emerge from the Cold War era as such a winner? These questions, which have been the topic of countless books and studies, are too difficult to answer in a single blog post. I just mention them to warrant my carrying around and reading books like “The Communist Manifesto” and “The Quotations of Mao” these days. (I got quite a few disconcerted stares in the airplane yesterday, as I was reading these books and diligently making notes in the margins.)

As I began to write this blog post about “Factory Girls:From Village to City in a Changing China” by Leslie T. Chang, I decided to watch her TED Talk, which has been translated into 26 languages and viewed over 1.1 million times across the world. In this video, she discusses what she learned as she investigated the working and living conditions of Dongguan, in the Guangdong Province. A part of the Pearl River Delta on China’s southern coast and near capitalist Hong Kong (which was then controlled by Britain), this city was a part of the first special economic zone that was created in 1979 under President Deng Xiaoping, which eased up economic restrictions and enacted measures to boost Foreign Direct Investment. While the surrounding areas are known for different expertise, Dongguan manufactures 40% of all the magnetic heads used in computers and 30% of all computer disk drives. Moreover, the city has averaged a growth of 15% per year for the last two decades. While many reporters and journalists focus on what is made and in what conditions it is made, Leslie Chang sought to change the focus on who made these products.

In her TED talk and her book, she discusses an incident in which after asking a woman about her work, she discovers that this woman has no idea what she is doing on the factory floor or even how it fits into the production system. In her TED Talk, she shared how this experience led her to eventually recognize that Marx’s ideas about labor were incorrect:

“Karl Marx saw this as the tragedy of capitalism, the alienation of the worker from the product of his labor. Unlike, say, a traditional maker of shoes or cabinets, the worker in an industrial factory has no control, no pleasure, and no true satisfaction or understanding in her own work. But like so many theories that Marx arrived at sitting in the reading room of the British Museum, he got this one wrong. Just because a person spends her time making a piece of something does not mean that she becomes that, a piece of something. What she does with the money she earns, what she learns in that place, and how it changes her, these are the things that matter. What a factory makes is never the point, and the workers could not care less who buys their products.”

By focusing on the aggregate and not looking into the experiences of individual workers, Chang suggests that Marx did not paint a true picture of manufacturers or of workers, in general. There are an estimated 130 million migrant workers in China and their work in these manufacturing facilities have helped transform their rural villages, as “money sent home by migrants is already the biggest source of wealth accumulation in rural China.” (page 13) Perhaps even more interesting to readers is the fact that a vast number of these migrant workers were women. Not only were they considered easier to control on the factory floor by industrialists, there were many other factors which contributed to women going out into the world to make a living for themselves. One of the biggest factors was the gender and family politics within their traditional, rural areas (where the one-child policy has never been strictly enforced.) Sons were always prized higher than daughters. As women were less treasured and less coddled at home, they were freer to become independent and do what they wanted.

By asserting their independence and making money to help sustain their families, women have been able to transform their statuses in rural societies. Chang notes wryly during Chinese New Year, when children are traditionally given red envelopes with money by their elders, the money began to flow in the opposite direction: “The young migrants dominated the holiday life of the village, enjoying the authority their money gave them.” (page 292) Even within Dongguan itself, Chang found herself always amazed by the tenacity of the women, who were viciously climbing up the hierarchy of their jobs and trying to improve and educate themselves in their free time from work. Instead of the women losing their individuality to production and manufacturing, she believed that she was seeing the opposite effect, noting that the women began to see for the first time that “now there was an opportunity to leave your village and change your fate, to imagine a different life and make it real.” (page 383)